I have a plant which I originally got from my mother.  We always called it Donkey's Tail.

"Donkey tail (Sedum morganianum), also known as burro's tail or lamb's tail, is a succulent plant with fleshy, cylindrical foliage that hangs over the side of a container. The tubular, tail-shaped stems can grow up to 3 feet long, making the plant a good candidate for hanging baskets. Donkey tail plant is low-maintenance and appropriate for beginning gardeners, but interesting enough to keep gardening pros satisfied." source and read more


The plant on top of the pot looks like this 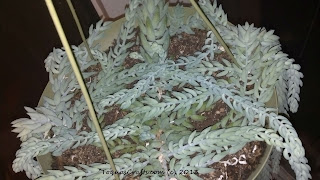 Each one of those tubular leaves are a seed.  Whenever I knock some leaves off I throw them into the pot.


The paragraph above where it says that they "can grow up to 3 feet long" cracks me up! I measured my plant from the top of the pot, to the bottom of the longest stem and it is 48 inches.  (When I was in school that equaled 4 feet.)  If I had room it would easily grow to 6 feet or more I am sure.

On the bottom left do you see that extra thick portion?  That is where I broke off a stem about half way up.  It grew longer, and it branched out and created three other stems.  Here's a close up:

Tip: If you have a Donkey's Tail or desire to grow one; When you go to shorten the stems, put the tip of it in a plastic or paper bag.  Let it coil up at the bottom of the bag, and then with a pair of scissors cut the stem off.  Doing it this way when you touch the stem, bump it, cut it, all those little leaves (seeds) won't scatter everywhere... they will be in the bag!


I was sitting on the couch in the plant room (while I was talking on the phone) and I saw something pink looking at me.  I tried to decide if it was the Donkey's Tail or even perhaps the Christmas Cactus in the pot behind where the stems hang down.  I looked and looked at it finally getting up to see what it was. 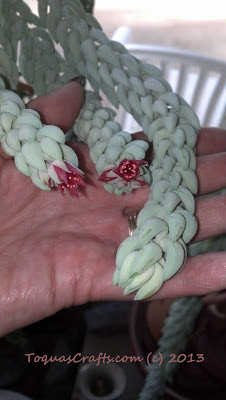 My Donkey's Tail bloomed!  In all the years I've had this plant I have NEVER see it bloom!  My husband said the blooms are for Meegan and Momma Kitty (see here).  I like that thought. 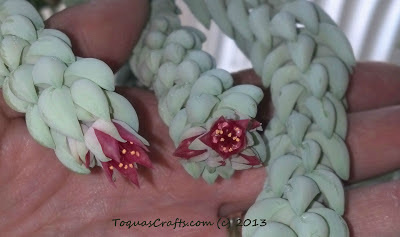 Aren't those flowers just precious?
Do you see? There are more coming too!


I found this picture on Wikipedia.  It shows the flowers much better than I could get a picture of, late in the evening, after the sun has gone down.  Look at all those flowers!


Do you have a Donkey's Tail?

Have you ever heard of Donkey's Tail before?

If you have a Donkey's Tail, has it ever bloomed for you?

Email ThisBlogThis!Share to TwitterShare to FacebookShare to Pinterest
Labels: plants