I left my home on Easter Sunday and flew into Reno, NV.  My father-in-law picked me up at the airport we then went and picked up my mother-in-law's mother (94 years young!)  We had a wonderful lunch and received GREAT laughs from Grandma Elsie.  My son drove in about 11 PM (he had to wait until he got off work).  Monday, April 25th Vincint had PRK surgery; this is similar to LASIK.  On Tuesday, April 26th we drove to Winnemucca.  (I lived in Winnemucca for 26 years prior to moving to Tucson with my husband).

Wednesday, April 27, 2011
Mom (me) is SO glad to be here to help my son post surgery & to be able to see my daughter! Grandma (me) went to Dyllan's class today to help, Vincint and I went to lunch with my friend Jeanne and to his daily eye appointment, we then went to Dyllan's t-ball game, watched both grandsons and fed them dinner before Mom got home after work. Boy am I pooped now!

Thursday, April 28, 2011
Today Vincint & I went & got Jesse before we met my friend Butch for lunch. We went to Walmart (again) I swear this is our entertainment... going to Walmart daily! We already have started a list for tomorrow! LOL We picked up Dyllan from school, took Vincint to his daily eye appt, came home, worked on homework, snacks & playing before Mom arrived after work to spend some time with us and to take the boys home.

One of my daughter's best friends came by with her two boys to see me before I leave on Sunday.  It sure was good to see her!

I hosted an "Open House" from 11 AM - 7 PM at my son's house for all my friends to come see me, instead of me trying to run all over town to see them.  Few showed up... one called and one emailed to say they were sick and would not be able to make it.  Another emailed to say she would be working all day.  It was a pretty relaxing day though... so I am not complaining.  We had the littlest grandson, Jesse, most of the day.  Dyllan came by after school.  Their mom came to pick them up after she got off work.  I went to spend the night at a girl friends house.  Another friend came out to her house so we were able to have some much needed girl time!

Saturday, April 30, 2011
My son, Vincint, and I went and had lunch with a long time family friend that had been out of town earlier this week.  We then went to see my daughter's house that she is purchasing.  My daughter and I then went onto washer and dryer shopping.  (They have a stacked set but the house is set up for side by side).  I then went to her house to do her nails for her... in  between the boys whining, screaming, laughing, NEEDING something out of the fridge, cooking pizza... ... It was the longest "nail" session I've ever had!  :)

Today is my last day in Winnemucca for this trip.  Tomorrow my son will be returning me to Reno.  We will be having lunch with another long time friend before going to my in-laws house for the night.

Sunday, May 1, 2011
We had lunch with some long time friends then we went onto my in-laws.  After I fixed my "famous" "Toqua's Tomato Macaroni Soup" and we were enjoying good conversation my son looked out their sliding glass windows and noticed that this little guy was running around on their back porch.  He came right up to the sliding glass door so I snapped his photo on my cell phone. 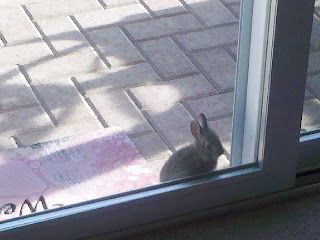