(I briefly mentioned this project when I posted about making the camouflage pants for my grandson. But I thought I'd show you a couple other photos that show more detail especially since Halloween is quickly approaching.)
Back to Halloween 2009 my oldest grandson told me that he wanted to be a pumpkin for Halloween and wanted grandma to make him a costume.  I said ok, not knowing at the time exactly what I'd be doing!

I went to the store and purchased a couple of yards of ORANGE cotton material and some black. I knew that was a good start!  I took it home and thought about it for a couple of days... this is what I came up with...

It is basically a vest that slips over the head.  I made it long enough that it folded up from the bottom so that it would attach with Velcro on the inside, this made it stuffable... also, when I shipped it to him it wouldn't cost me as much to ship.

I wasn't blogging then, so I do not have a tutorial, just these photos of the inside. 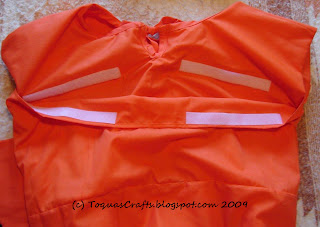 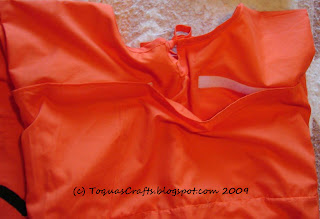 I put elastic at the waist line.  This is actually big enough that a small adult could wear it if they wanted!  (Growing room).  I appliquéd the face on. 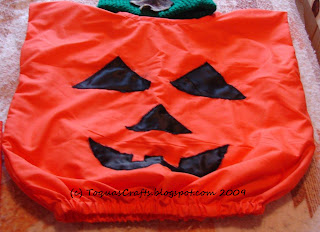 I had enough material left over that I made a treat bag. 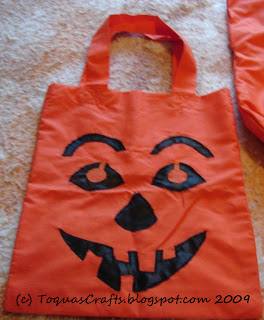 Where they live it can get REALLY COLD on Halloween (I've seen it snow, and have also seen it below zero for Halloween.)  So I thought that he needed to be sure to be warm, so Grandma (me) set down and crochet him a hat. 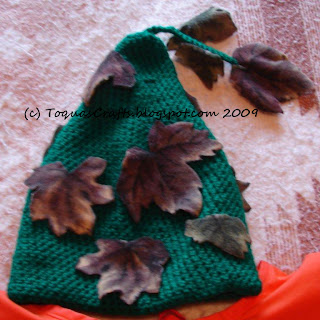 A couple of years prior I had made my husband a camouflage fleece blanket.  I had some of that material left over, so I cut out some of the leaves and attached them to the hat.  I attached them loosely so that they could be easily taken off and the hat used later if they wanted.


I looked at the 2nd hand stores for an orange sweatshirt and black sweat pants but ended up at Walmart.  So here's the whole outfit (pre-grandson) 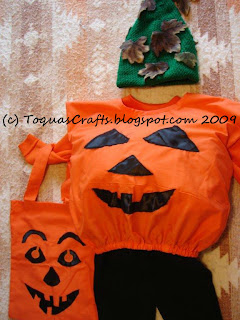 And here it is with grandson 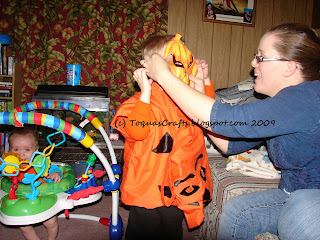 Oh yes!  He decided he wanted a pumpkin mask so Mom is helping him with that...
And that little tyke over to the left... he's now using the bunk beds for his own personal monkey bars! 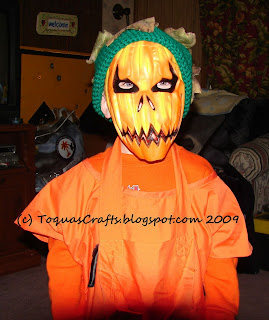 He has the treat bag hanging around his neck!  LOL 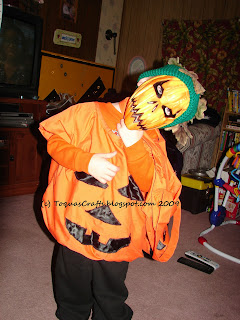 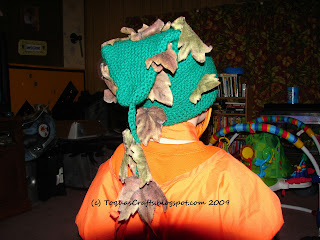 Linked up to: Craft Ideas