Earlier I showed you the Spider Web Afghans I made for my grandsons for Christmas.  They have had a lot of cold this winter.  There was at least 3 weeks if not a month where their highs during the day was not above freezing!  Ugh.  As much as I miss them... I am truly glad I do not live there anymore!

I had PLENTY of red yarn left over from the afghan projects so I thought to myself, "What else can I make? Hmmm...???"  As I was trolling the Internet one day... I saw patterns for a Spider Web hat and a Red Bird hat... and it set my gears in motion! I called my daughter and asked her what the boys would enjoy the most... she said one of each. 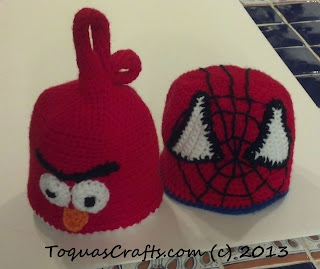 (I apologize for the pictures... I was a bit behind in getting the hats to the grandboys and I took these the night before I mailed them. The lighting wasn't the best.)
I made the Angry Cardinal hat first.  I used a pattern that I received from Heidi at Snappy Tots.  You will have to contact her to see if the pattern is still available.  (I believe it may have been retired.)  Heidi is one talented crochet artist (most especially with hats!)

Quite frankly I was surprised at how quickly I was able to crochet the pattern.  You start from the tip of the feathers and work all the way down to the bottom of the hat.  Once you are done you fold and sew the feathers to look this way (they start out as one long tube that is smaller initially and the closer you get to the hat itself it gains in girth). 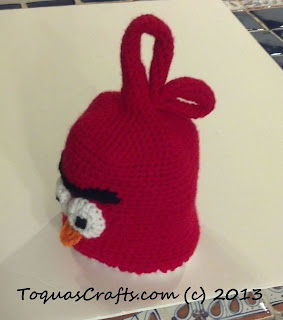 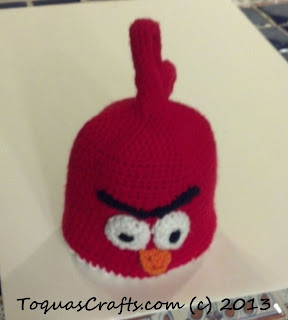 After using her pattern for this hat I decided I would use her pattern for the Beanies for Bravery to make the Spider Web hat.  You have to be a member of Ravelry (it's FREE) to get the pattern HERE. I followed the directions using a size F hook so it would be smaller for my youngest grandson. 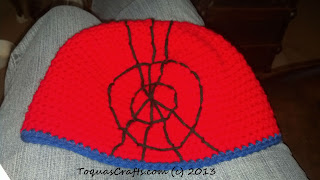 After I had the hat crocheted I added lines and circles using the method of adding the lines used in the Spider Web afghan.  After adding the two circles in the front, and dealing with the yarn knotting up as it was coming out of the skein... (that ALWAYS seems to happen... it could be a very frustrating part of crocheting, but I choose to look upon it as a break I must have needed.) 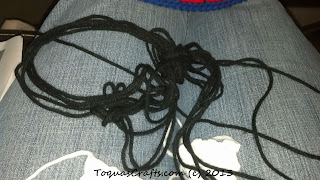 I decided that I needed to add another circle. 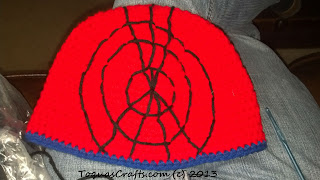 Now for the eyes... I just did it as I went.  (Bad Blogger I know).  This is what I did (to the best of my memory) for each of the (2) white triangles. I crochet about 13 chains.  For row (2) I single crochet in the second stitch from the hook across to the end.  For row (3) I *chained (1) and sc from the second stitch across, leaving one stitch at the end.*  I continued from * until you have 5 or 6 rows and a triangle shape.  Once your triangle is complete I simply did a single crochet around the triangle with black (leaving a 12 - 18 inch tail for sewing). 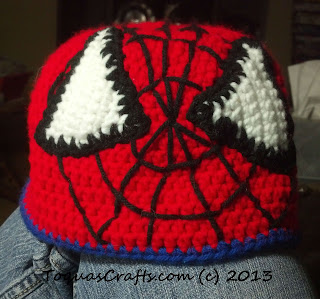 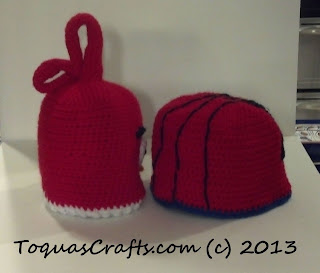 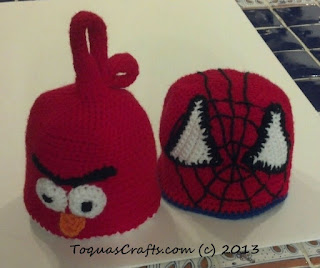 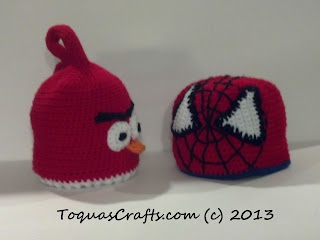 After these pictures were taken I decided that the Spider Web hat needed another row of blue... so I added it on... 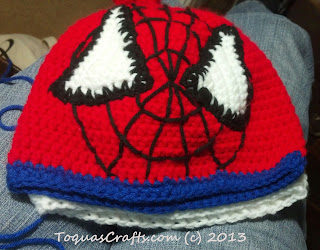 I took the hats to church to show some of my friends there what I had created and the Pastor's wife fell in love with the Angry Cardinals hat and one of the band members wanted one for himself!!   So I made one for him too! 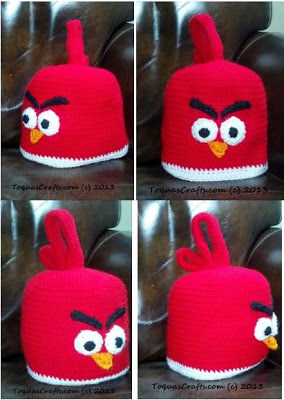 And my grandsons with pictures their mom texted to me... 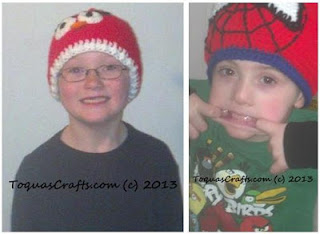 The younger one always makes faces these days when my daughter takes his picture. Ha!  Not a very good picture of the hat I realize... but I take what I can get from the busy single mom, working full time, and attending an on-line school!

I've linked to:
The Dedicated House
I Gotta Try That
Inspire Me Monday
i should be mopping the floor
Made by you Monday
Tickled Pink
MyRepurposedLife
Think Pink Sunday