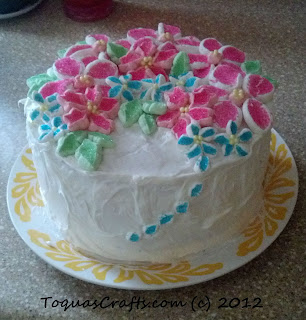 A few weeks ago my friend Jen, from Sunshine Greetings (she guest posts here often) had a birthday.  I went to her house a day early to help her get ready for the party.


One of the things we did was to decorate this cake.  She was inspired from a couple of articles in Better Homes and Gardens.

She made a four tier cake, similar to what is seen here, but she used a lemon mix and a strawberry mix.  I had a friend tell me just the day before I went to help her out that if you use 12 oz of soda and the mix.that.is.it.


Jen made a "glue" of powdered sugar and water.

For the large pink flowers I cut the large marshmallows into slices, if I recall correctly it was 5 slices per marshmallow.  Prior to dipping them into the pink sugar I pinched them into an oval shape and set them onto waxed paper.

Jen started cutting the small marshmallows on an angle and dipped those into the blue sugar, then set them onto the waxed paper.

According to the instructions we were supposed to "glue" the petals to a large white chocolate drop (or something - I honestly to not remember - whatever it was... we didn't have it.)  So... we used marshmallows!  We had two and a half bags of them... what the heck!  :)  Once cutting the pink marshmallows they could easily be reshaped and flattened.  We used these to glue the larger marshmallows to... and as the centers for the larger pink flowers.  Then putting some "glue" on top of the centers we added some sugar pearls.

For the blue flowers we used a cut piece of the white marshmallows to use as the base to "glue" to. We then added "glue" to the center and added sugar pearls.

When using the stars to form flowers we pinched one peak so they would fit in the centers easier.

Once we were done we put all the petals, leaves, flowers on waxed paper and put them in the refrigerator.  I told Jen they had to stay there until the next day when we actually decorated the cake.  I came home (1+ hr drive away).  That evening Jen baked the cake.  I went back the day of the party and she insisted that I decorate the cake.  LOL 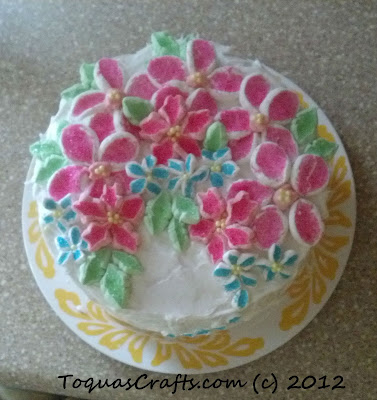 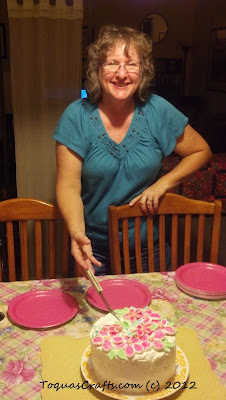 Happy Birthday Jen!  Thank you for letting me help you with the decorating of your cake and enjoying your party with you.  Thank you for allowing me to share this on my blog.


I've linked up to:
Natasha In Oz
Inspire Me Monday
Toasty Studio
Mealtime Monday
Mop It Up Mondays
Polly Want a Crafter
The Gunny Sack
A Creative Harbor